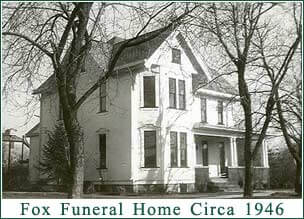 Albert was joined in the business by his son William J. "Bill" Fox, upon completion of his education in 1959. In 1985, cremation equipment was purchased to compliment the funeral home as the cremation rate increased. We were the first cremation facility operating in Butler County.

In 1986 Brian W. Fox completed his education and joined his father Bill in running the funeral home. The funeral home and crematory are now run by Brian, the third generation of the Fox family to continue the family tradition.